I may not have crafted for myself, but Bob and I have crafted together - it forms an important part of our homeschooling week. For this post though, I thought I'd share the cake and card I made for his birthday earlier this year. No prizes for guessing that his favourite cartoon at the time was "Penguins of Madagascar"! 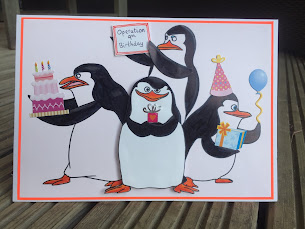 What I used:
Colours: Sharpies
Embellishments: Papermania die cuts and stickers
Image: From Pinterest
Posted by mand at 14:06 No comments:

I first put this photo, along with half a dozen different green and white papers, into my 'soon' folder close to 2 years ago. I finally got around to looking at templates and other pages on Pinterest a few days ago and, amazingly for me, the bulk of this layout was done in one day.

It was a great time to do this layout - we went to the same woods today and found that the snowdrops are in full bloom again now :-) 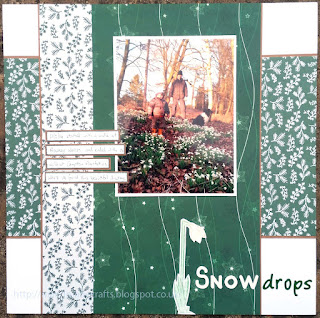 Bob had a couple of thank you cards to make after Christmas, and I forgot to share them. Again, he designed them himself and did almost all of the making, including all the lining up and the sticking down. I just helped with some of the fiddlier bits of flower detail on one of the cards, and took the fragile butterfly stickers off the sheet for him. 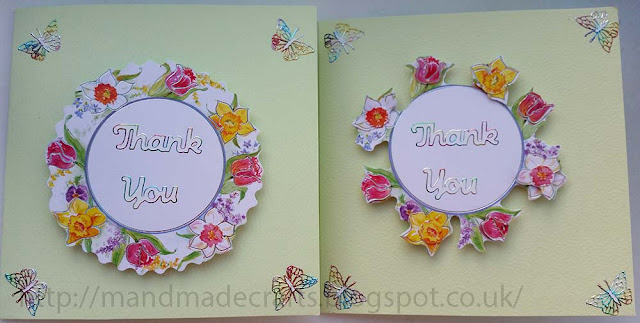 When Bob was smaller, he loved hunting for chocolate at Easter so much that we used to hide sweeties for him on walks at other times too. This page is from one of those times, when his Easter chocolate lasted a couple of weeks. I really love the look on his face in the first of these piccies, where he's just spotted the chocolate bunny in the tree. This was one of his favourite climbing trees, and we really must take him back to it soon. 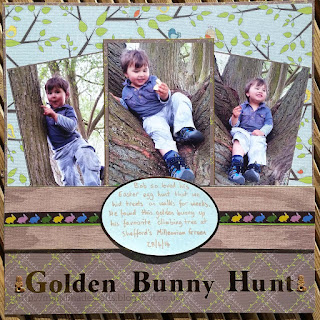 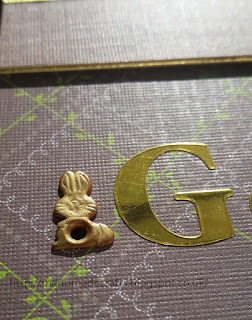 When I was little, most people only took photos on holiday and at special events. There was no chimping to see what the photo was like, as photos were shot on film. There was no taking half a dozen almost identical pictures to be sure of just the right expression, as the films only had room for 24 or 36 shots. And there was no 1 hour processing service either, films had to be posted off to the processing service and took a week to come back. As a result, there are very few photos of my childhood. Bob, on the other hand, has lived his whole life having everything he's done photographed many times on a camera phone. As a result, I have so many photos printed out that, for the past 18 months, I haven't felt I could order any more new prints from Photobox until I've made a dent in the existing pile. With this in mind, I'll be mostly focussing on layouts with lots of piccies, though I'll probably need to throw in a few simple layouts too, for morale - I procrastinate a lot more over double pagers!

This layout is the second of two 2 page layouts I've been working on this month. The thing I find the hardest on any layout is how to present the journalling so that it looks like it's not just stuck on as an afterthought, and it seems especially hard on 2 page layouts. 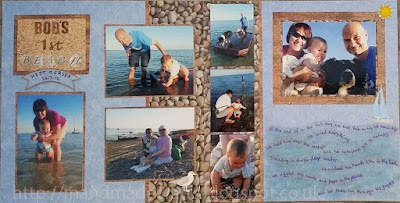 While I was making this layout, Bob wanted to have a go with the seagull and yacht dies, and made this for me :-) He even added a number on the yacht. 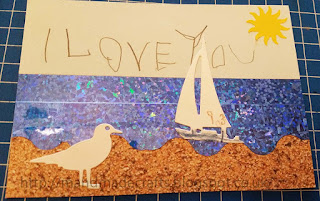 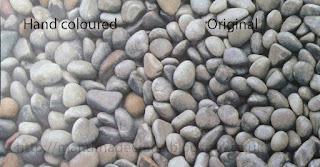 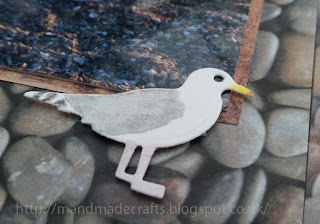 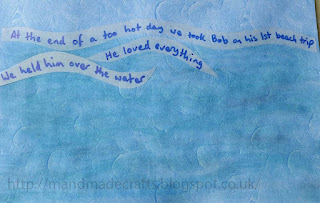 I had a very clear idea of what I wanted to do for almost everything on this page quite soon: photos going up and down to suggest a two-tone siren, red and yellow background suggesting a fire engine, and "Nee! Naw!" title spread across the page. Almost everything, that is, except for the journalling, which I just knew I didn't want in a default box. I did almost all of another double page layout while I tried to figure it out. When I get stuck, I often find that explaining my stuckness to someone helps me to unstick, and that's what happened here. Showing my Mum and Dad, the idea for blue lights as journal blocks seemed so obvious I couldn't understand why I hadn't thought of it before. It came out better than I thought - I love the way it contrasts with the red and yellow background.

As always now, I used this project to show Bob a few things about design - the main thing here was showing him how matting the photos and the title letters makes them 'pop' out of the page. 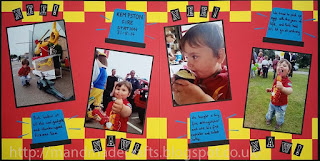 It was my Mum's birthday a few weeks ago, and Bob made a card of his own, as well as helping with mine, so I thought I'd share our creations:

Bob's latest card
He chose all the elements and designed the card himself. He learned how to butt one paper up against another, and we looked at how using foam pads makes decoupage stand out against the background
What he used:


My latest card
Although I used a kit, this card gave me a little bit of teaching opportunity. I showed Bob how to add glittery dots around the outside, and how to add dimension to a single layer. For a couple of the main pansies I curled the petals and added foam pads only to the outsides of the flower, and glued the middle of the flower down to make a more realistic bowl shape. Bob thought this was really cool and had a go himself :-) 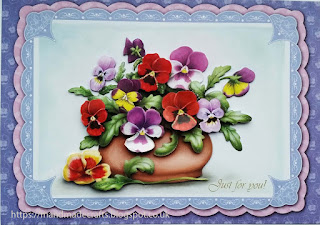 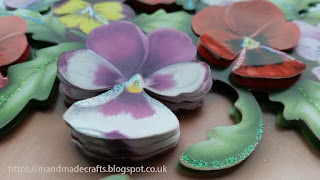 What I used:
Papermania pansies A4 card kit
Stick It glitter glue.

Summary of the skills Bob practised: